Are you looking to hang out with a few friends on Halloween night and watch a great horror flick? Every day in October, I’ll be suggesting a film that I believe will make for excellent Halloween viewing. Whether you’re an avid celebrator or a casual observer of the holiday, these films will convey the proper mood and spirit of October. In no particular order, here are 31 excellent movies for Halloween Night—or whenever you’re looking for a frightfully good time. Enjoy!

My recommendation for October 26th is… Return of the Living Dead.

Official Synopsis: When two bumbling employees at a medical supply warehouse accidentally release a deadly gas into the air, the vapors cause the dead to rise again as zombies.

Part unofficial sequel to George Romero’s seminal Night of the Living Dead and part comic send-up, Return of the Living Dead reinvigorated the Zombie sub-genre at a time when it was relatively set-in its ways.  Dan O’Bannon’s brilliant horror comedy is responsible for a number of innovations to Romero’s formula.  For example: Zombies are fast and slow (depending on their level of decomposition), Zombies can talk (although rather measured and primitive), decapitation is not enough to stop one of these guys, and, most significantly, RotLD was the first film to have an undead utter the now infamous refrain: “Braaaaaaaains….”  RotLD features many iconic characters including Tar Man, The Yellow Man, and Trash (a sexy Zombie vixen hot enough to inspire scores of teenage masturbation fantasies).  With an 80’s punk rock soundtrack and aesthetic, this film is a rocking good time from start to finish. 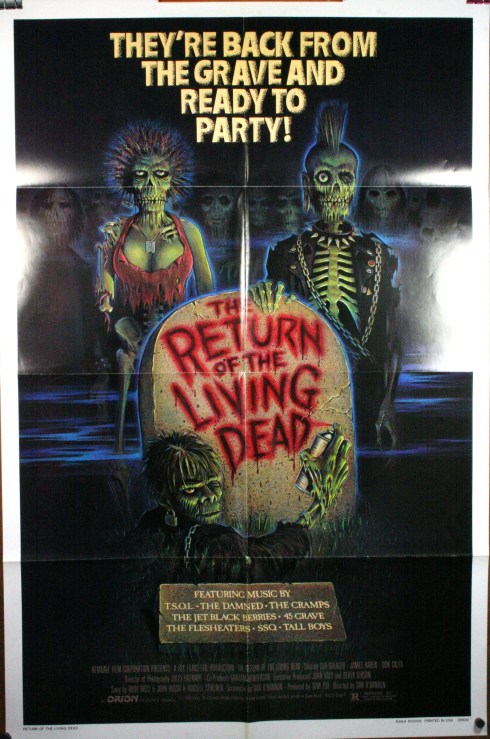 For an excellent double feature, consider following Return of the Living Dead with the definitive documentary released around the film’s 25th anniversary: More Brains!  Narrated by Brian Peck (who played Scuz in the original), this documentary shows that the comedies and dramas behind the scenes were just as entertaining as the film itself!